Thwaits and Bogetich claim victories in SGT and GT class

AUSTIN, Texas (5 October 2019)- It was a game of patience for the Trans Am Series presented by Pirelli drivers during Saturday’s multi-class TA/SGT/GT 100-mile feature at Circuit of The Americas.

Adam Andretti (No. 44 SRI Performance/ECC/ Anchor Bolt Screw Dodge Challenger) delivered on his post-qualifying promise to be respectful of Ernie Francis Jr. and Chris Dyson’s championship, but still managed to move himself into the winning position. Driving the same Pancho Weaver-built car that Boris Said drove to Trans Am victory just two weeks ago, Andretti reeled off a series of fast laps late in the race, closing nearly an eight-second gap in an all green race. The drive secured his first win at CoTA since 2015 and his maiden victory in  the TA class. 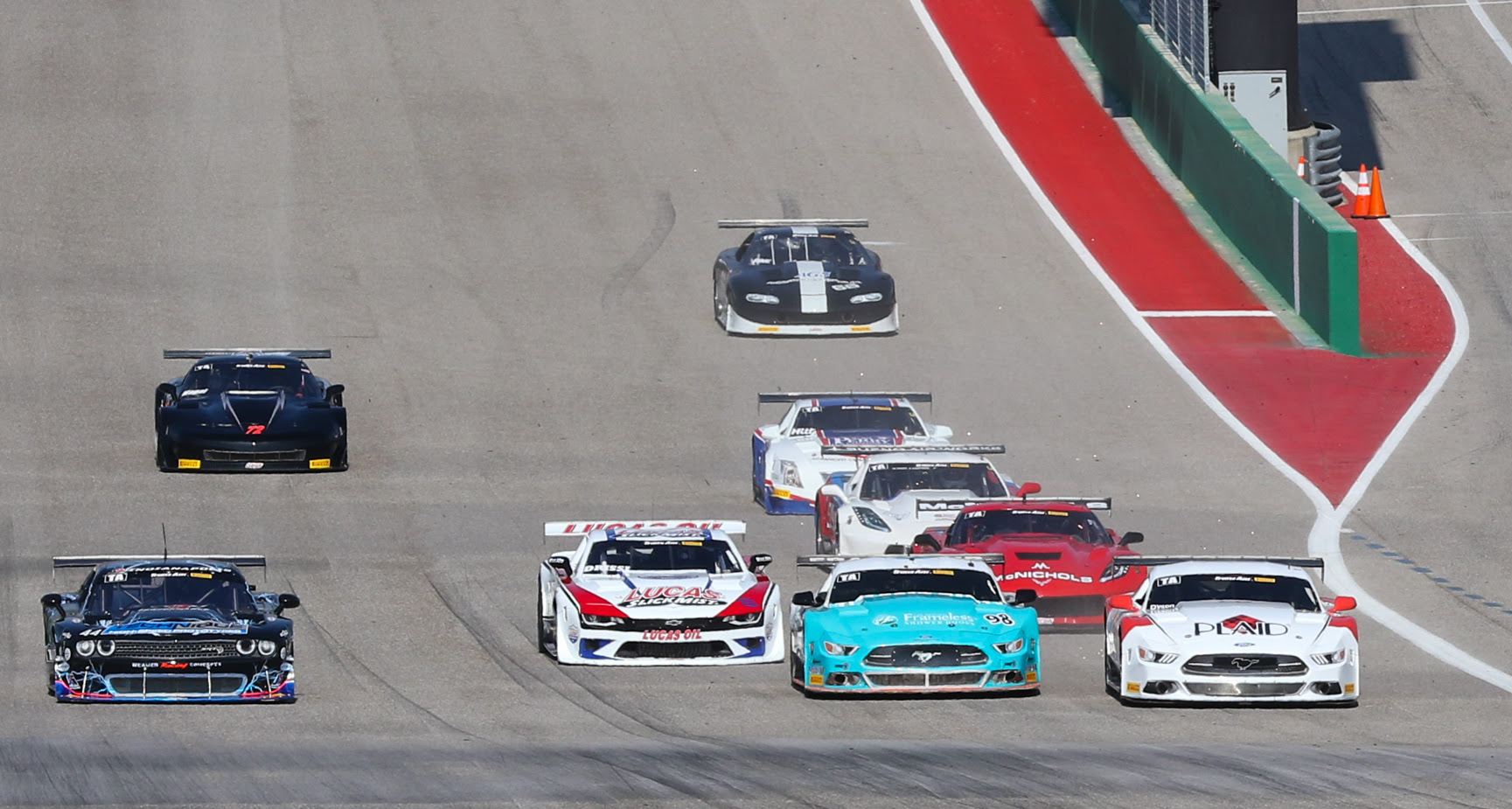 In a race-long battle for position, all three major manufacturers were represented on the podium as Chris Dyson, in the No. 20 Plaid Ford Mustang, and Tomy Drissi, in the No. 8 Lucas Oil Slick Mist/ Axalta Chevrolet Camaro, finalized the TA class top-three.
“This race was for my wife and brother John,” said a teary-eyed Andretti. “There was a lot of good stuff going on this weekend, a lot of good vibes, all the people who support us made this possible, without you, none of this is possible."

“We were hoping to capitalize today after Ernie (Francis) had some troubles to get a win out of it, but we had some issues with the car and it’s been a frustrating season in that respect,” said Dyson. “I personally got as much as I could out of the car today. I was just glad to get to the end and try to win it all at Daytona.”

Drissi started on the outside of Row 2. Entering into Turn 1 he and Amy Ruman (No. 23 McNichols Co. Chevrolet Corvette) made contact, sending the pair spinning. Both were able to continue but Drissi lost precious ground on the leaders, falling back to ninth. Drissi recovered speed lap after lap, until he was finally able to overtake Francis Jr. with five laps left in the race for the last podium spot.

Starting from pole position, Francis Jr. looked to have the race in the bag. Taking a commanding lead early, the championship leader built an eight second gap by Lap 10. Then disaster struck for the Breathless Racing driver as he lost power steering with just 10 laps to go. Muscling through the 20-turn circuit, Francis Jr. lost speed and the lead he worked so hard all race to build faded. Francis Jr. managed to hold on to finish the race in fourth. 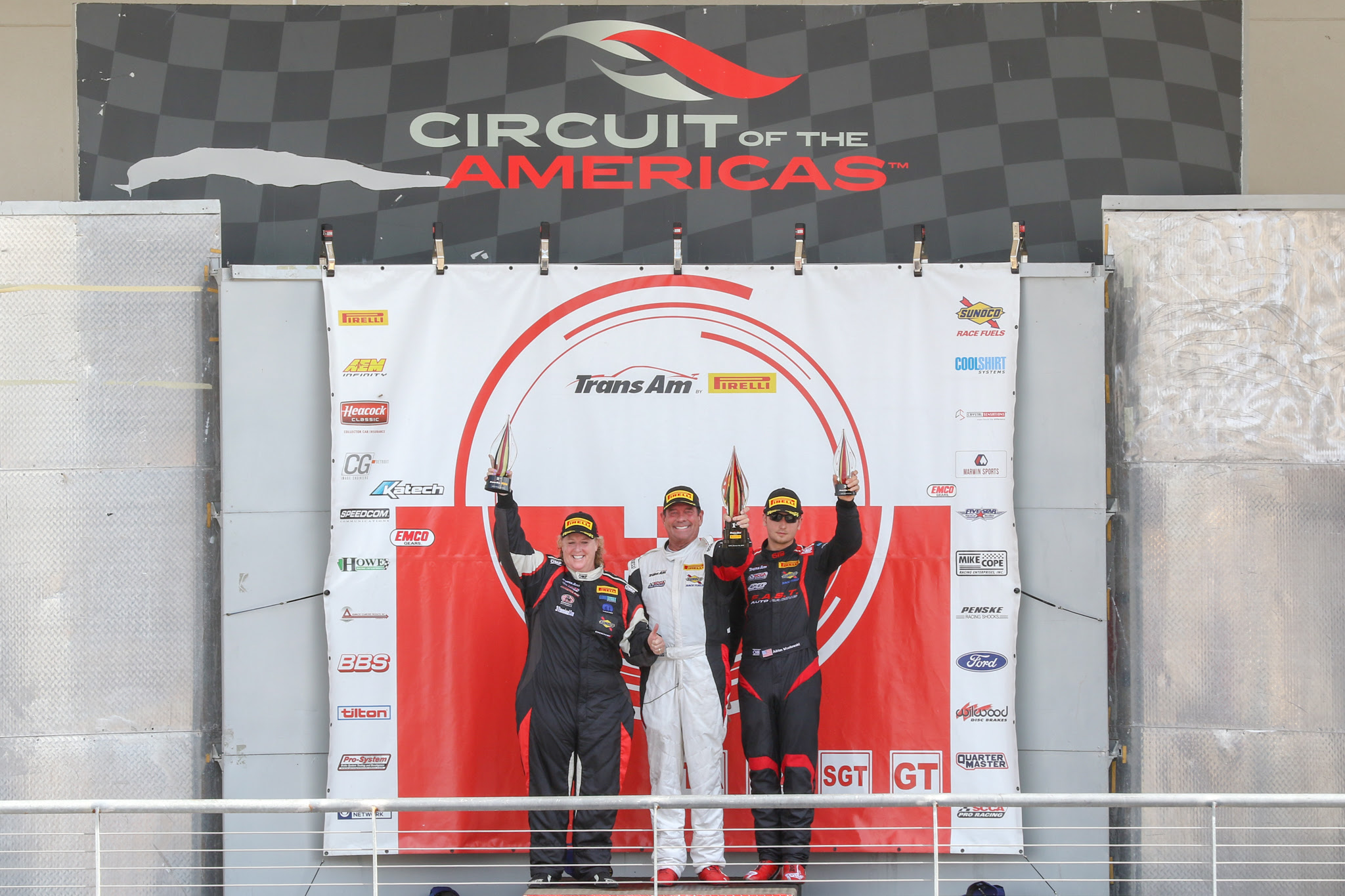 “We had a really good race going there,” Francis said. “We’ve been the fastest car all weekend and that was true in the race too.  We are really pushing hard for this championship and pulled out a big lead but we lost the power steering. I was fighting all the hydraulic fluid in the rack. It was definitely tough to have it happen here, I was having to really muscle through there and it felt like turning a wheel through concrete!  So to get a fourth place finish is better than we could hope for given what happened. It keeps our championship lead and hopefully we can get to Daytona and bring this thing home.”

The SGT class race was just as exciting. From the start, pole-starter Cindi Lux (No. 45 LuxPerformanceGrp/BlackRockCoffee / Dodge Viper), Ken Thwaits (No. 5 Wilwood Brakes/Franklin Road Apparel Audi R8) and Aaron Pierce (No. 26 Logical Systems Inc/Sam Pierce Chev Chevrolet Corvette) battled three-wide through turns and straightaways for multiple laps, until Pierce experienced mechanical issues and was forced to retire the race early. But, Adrian Wlostowski (No. 96 F.A.S.T. Auto Ford Mustang) was there to take Pierce’s place, inserting himself into the mix.

Thwaits paid back Lux from qualifying using her drafting move to take first. He was able to hold on to claim his first win of the season and the Cool Shirt Cool Move of the Race Award. Lux took second and Wlostowski rounded out the SGT class podium in third.

Milton Grant (No. 55 SentrySelfStorage/FairfieldInn / Porsche 991.3 GT3 Cup) received the Masters Class Award for his seventh-place finish in the SGT class.

WEST COAST CHAMPIONSHIP
Stakes were just as high in the Trans Am Series presented by Pirelli West Coast Championship as the championship’s third season came to a close on Saturday.

Simon Gregg (No. 59 Derhaag Motorsports Chevrolet Corvette) clinched the TA class West Coast Championship one round early, leaving Michelle Nagai (No. 72 Berkeley Jet Drive Inc. Chevrolet Corvette) and Michael Fine (No. 66 AGS-Architectural Glass Systems Chevrolet Camaro) to a shootout for second place in the championship. Nagai brilliantly tackled the legendary CoTA circuit on her way to her first win of the season.

“It’s super special to win here at CoTA,” Nagai said. “We had mechanical failures one way or another all season, a lot of should ofs and would ofs, but you know what, we did it here today. We got rookie of the year in the West Coast and second in the championship. We are ready to come back next year.” 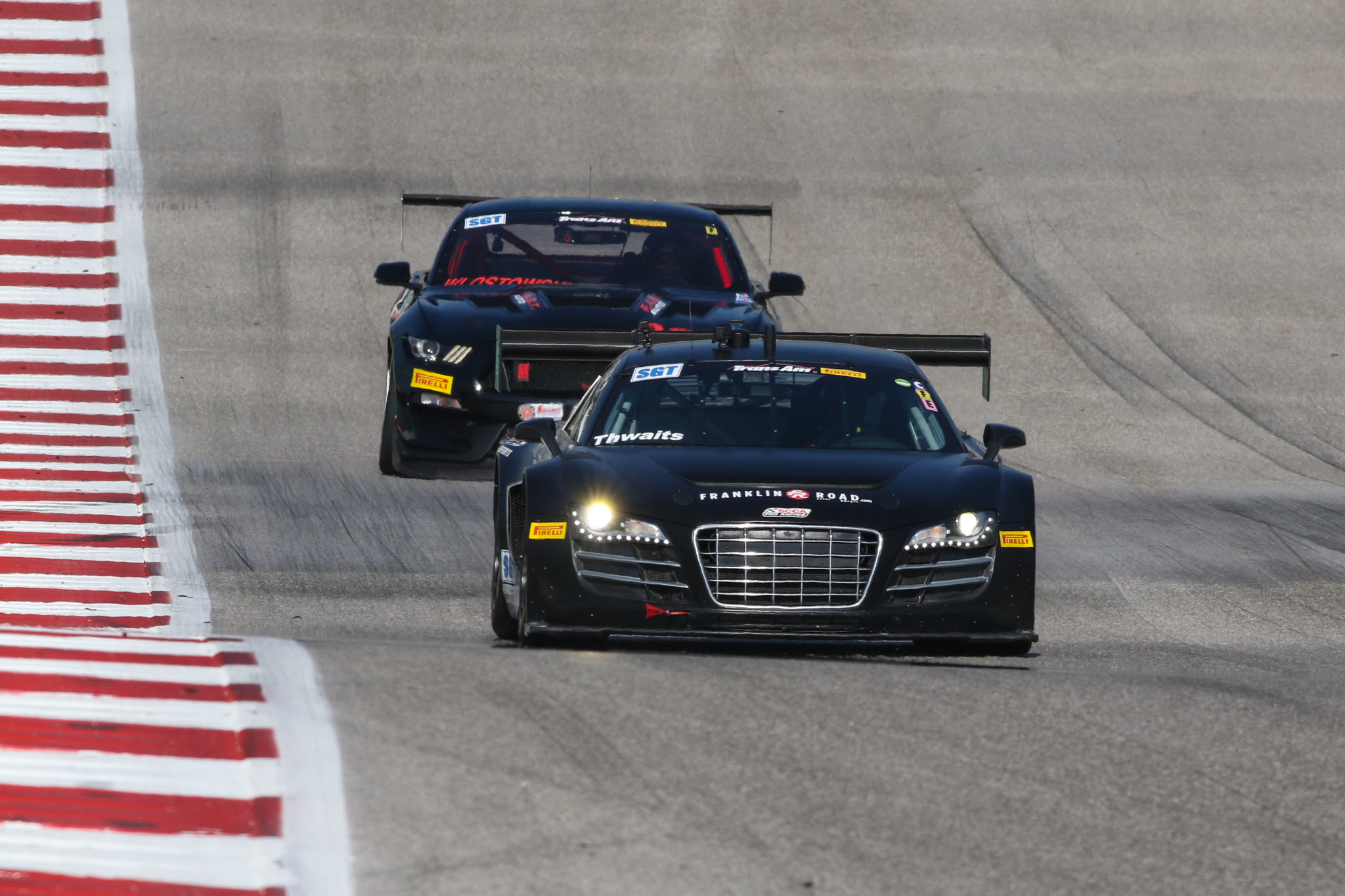 In an all West Coast GT field, Joe Bogetich (No. 65 Westover Controls Chevrolet Camaro SS) went flag to flag for the win. However, it was Roger Eagleton (No. 98W FiveStarPropMgmt/EnergyRealEst Ford Mustang) who claimed the overall GT West Coast Championship with his second-place finish. Beau Borders (No. 7 APEX Race Parts/CorteX Racing Ford Mustang) completed the GT podium in third.

“It’s really a great honor to win the West Coast Championship in the GT class,” Eagleton said. “The team Dig Motorsports is only in its third year of existence and to win a pro-level championship is really amazing. A lot of thanks goes to Trans Am to make this possible. We got to race at world famous race tracks at a level of affordability that doesn’t break the bank, that works for us and works for our sponsors. It’s a great stepping stone for us as we want to work up to TA2.”

The National Trans Am Championship heads to Daytona International Speedway Nov. 14-16 for its season-end finale.